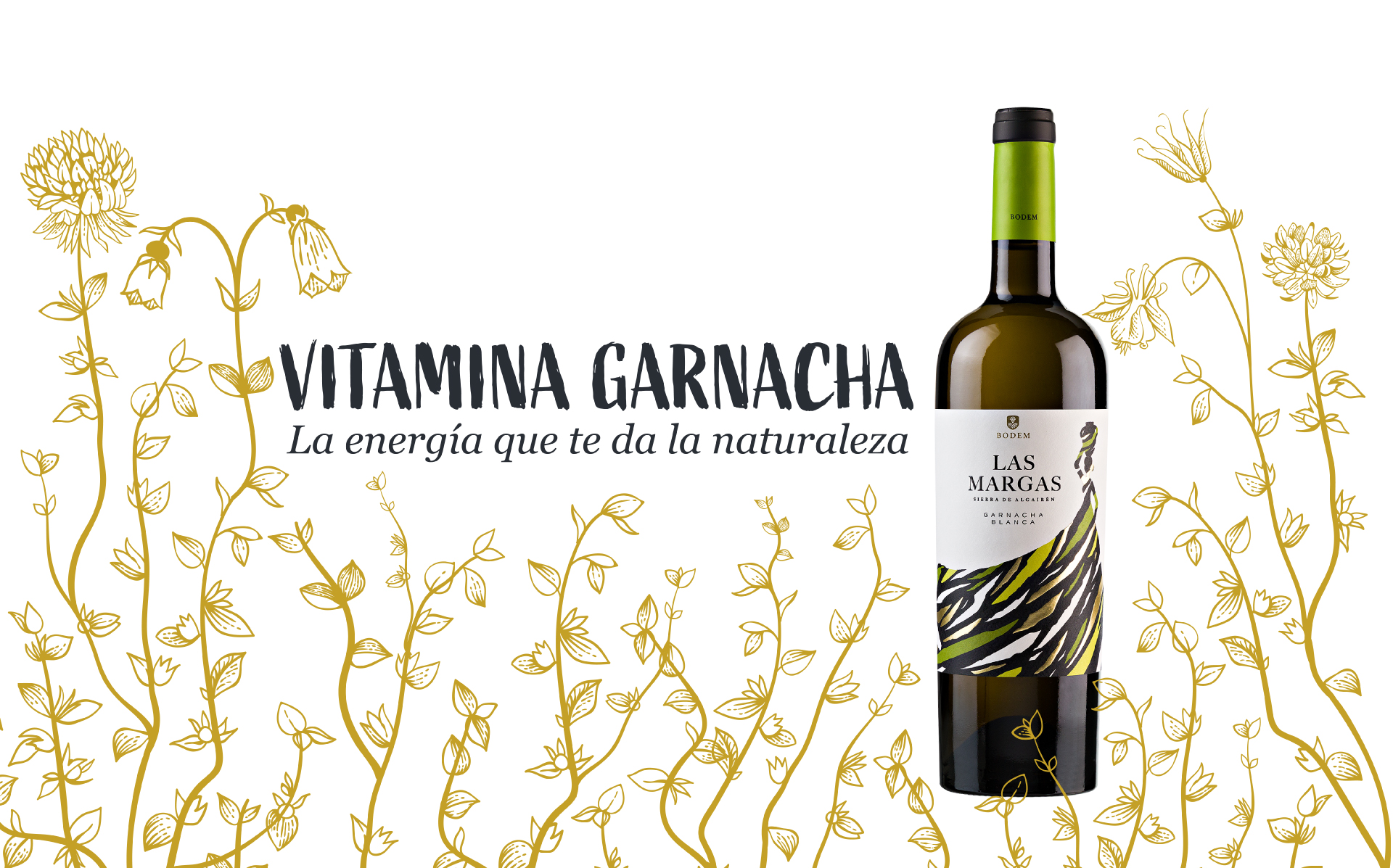 After 5 years, the winery has created the perfect complement to its first wine, Las Margas Tinto. On this occasion, Bodem Bodegas surprises us with a 100% white Garnacha Blanca. A white with vitamin Garnacha, the energy that nature gives you”, as indicated by the slogan that will accompany it throughout the year.

A contribution of happiness, hope and the desire to live intensely are the components of this Garnacha Blanca from Bodem Bodegas.

The purpose of this wine is to express in a bottle the essence of the Sierra de Algairén area, cradle of the Garnacha grape: a very peculiar area, with a singular terroir and altitudes between 500 and 800 meters.

The Garnacha blanca grape was chosen for this wine because of its ancestral origin, as it is a very widespread grape in the area, although over the years it was no longer cultivated and was replaced by other more productive varieties.

Currently, due to its potential, it has been recovered and planted again in the Cariñena area.

The particularity of the winemaking process of Las Margas Garnacha Blanca lies in the vinification and aging. These are carried out separately: 75% of the must ferments in stainless steel, remaining on its lees for 4 months; and the other 25% of the wine remains for 4 months in new 500-liter barrels.

The final blend is made a few days before the beginning of spring.

Intense white-fleshed fruits such as peach and mango stand out on the palate, accompanied by flowers, dried herbs and a mineral background due to the terroir of deep, chalky, clay soils.

Its flavor is surprising as it invites us to travel to other wine regions of the world. It is a very enveloping wine, with a persistent finish that allows us to accompany meals much better.

Las Margas Garnacha Blanca is a very gastronomic wine due to the oak, fat, body and acidity of the finish.

Women in the world of wine

This launch coincided with Mother’s Day weekend and highlights the role of women in the world of wine.

As can be seen, the label shows the silhouette of a lady carrying a ceramic amphora on her head. The ceramic refers to the characteristics of the soil from which the grapes used to make Las Margas Blanco are grown and the area in which it is located, known for its wine and ceramics.

As for the stripes on the skirt, they simulate the different layers of the soil, that terroir so characteristic of the Sierra de Algairén. The colors chosen, a green chromatic range, are marked by the type of wine it is and the grape that composes it.

Las Margas Blanco is the result of the work of many people, who have managed to expand the family of Las Margas, with the intention of being present in those moments of joy and happiness that surround a bottle of wine.

With this vitamin Garnacha, produced from nature, Bodem Bodegas, aims to spread that energy, happiness and hope, which we need so much at this time.

Pairing: A perfect ally of couscous with curried vegetables, salmon tartar with avocado or a vegetable eggplant moussaka. Grilled white meats create an excellent combination with this energetic Garnacha blanca.

Taste it to discover the most authentic profiles of pleasure.

Tasting notes: The nose is dominated by white pulp fruits, lime, mango, along with mountain herbs such as thyme and fennel, which give it great complexity.

Bodem, which means “soil” in Dutch, truly symbolizes the origin of this winery with Dutch roots.

After more than 30 years working and living by and for Spanish wine, the Geirnaerdt-van Ekeris family found in Cariñena the place to which they felt deeply attached. That is why Bodem is not just another winery but a firm commitment to Spanish wine, to the Garnacha variety and, in short, to a dream.

Slopes of Marga in the Sierra de Algairén. Gray, arid and eroded lands, where the elegant Garnacha finds its little paradise.

The first wine of our Bodem winery is Las Margas. Las Margas is the beginning of a continuous process in which we have the conviction to improve year after year the previous one, taking advantage of our experience and knowledge.

In short, to dream of a better future.

The winery produces vegan wines, which offer the maximum expression and strength of Garnacha, with great depth and tremendous persistence.

The perfect wine for a good barbecue
Pagos del Moncayo expands the family with Prados de Rosas
Garnacha: everything about this fantastic grape
Previous post
Next post